I haven't felt like writing much the past two months. Well, part of me has, but I haven't had any initiative to do so. As you can tell, though, I've finally found the desire to jot down some words.

I lost my mom two months ago today. 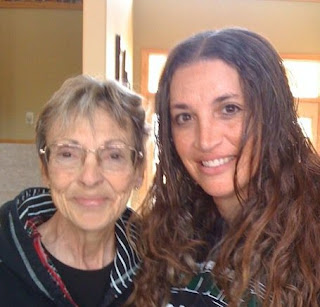 My mom was my biggest supporter. She was on board from day 1. She was with me for FFS and SRS, and came out to California when I ran for Ms. Transgender San Francisco. She was there when everyone else questioned my decisions. She was all a kid could ask for - a mom with unconditional love for her children and her family.

I'm doing OK. I am, trust me. It is definitely an unusual feeling going through the loss of a parent. Ever since my mom was diagnosed with cancer in the summer of '05, I had slowly started preparing myself for the eventual loss of my mom. They say you can never be prepared for it.

I'm going to include my written journal entry that I wrote two months ago...just a few hours after my mom died. It is not a happy entry, but it details the last hours of my mom's life. My dad had called me around lunch the day before and told me that the nurses said if I was going to be there, I had to get there soon. I found a 6pm flight home, and arrived at the airport just after midnight. The entry follows:

I landed at the airport this morning - just past midnight. My aunt and uncle were there to pick me up, and as soon as my luggage popped up, we were on the way to my parent's house. Dad called me right after my aunt found me. Mom was still hanging in there, but not doing that great.

My uncle was exhausted about 45 minutes from my parent's place, so I took over driving. We pulled into my parent's driveway around 2:30am. My sister caught us on the steps and said that what we would find inside wouldn't be pretty. She was crying and having a hard time. I gave her a hug.

When I came inside, Mom looked like she was struggling to breathe. She would rock her head back slightly when she inhaled. There was no CPAP machine to help with her breathing. Dad tried to rouse her, but she didn't wake up. I said, "Hi, Mom. I made it. I love you." I can only hope that she heard me. We all gathered in the living room and took turns rubbing her hands, arms, or feet, and telling her that we loved her.

About 3am, my sister and dad decided to lay down for a while. I stayed up. Around 3:15am, hospice decided to give Mom some liquid pain killer along with the anti-anxiety meds. Mom's breathing seemed to become softer as though she was in less pain. We gave Mom another dose an hour later as directed by hospice, and her breathing became shallower. We woke my sister and dad since Mom's condition had changed and our hospice worker said that Mom was nearing the end.

Around 4:30am, her breathing became really shallow, which I thought was from the meds putting her in a more relaxed state, but her breaths became fainter and her time between breaths increased. She slightly leaned forward - gurgled twice - then fell back. She took one or two very shallow breaths, and then she was gone. She died around 4:37am this morning.