I was recently in China on my eleventh trip there for work.  The places that I typically visit, either for work or  at the hotel, have a western style toilet.  I learned early on, though, that most of the area restaurants probably do not have one, though, so I usually pee right before leaving work and heading out to get dinner.

On this latest trip, though, I visited a vendor that I rarely see.  From the outside of the building, the facility looked very nice and contemporary, especially for China.  While the inside of the building was still very clean and nice, the toilets were not.

I had previously been to Japan twice in the 90's and had to use the Asian style "squat" toilets there.  The difference is, though, that I was still living as a man.  I did have to use the squat toilets there for #2, but there wasn't really any coordination needed other than keeping the ends of your pants from hitting the floor.  Japan also had fairly dry and clean facilities. 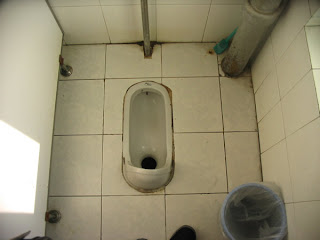 So, I have to use the restroom at the vendor around mid-morning.  I walk in and open a stall door, only to be staring at something similar to the picture on the right. (I found this picture on the internet.)   Gah!  So, I look around the facilities to see if there is a western style toilet, but I didn't see anything on the stall doors suggesting such.  A Chinese woman then motions for me, grabs a bunch of tissue from the dispense unit near the door, and hands it to me before shooing me into a stall.

Now, this isn't the first time that I have used a Chinese style toilet as a woman.  I tried once before, but because I was wearing really nice clothes, I took off my pants before even attempting to pee in the trough.  The previous time was also in a more upscale Chinese style toilet that was a single small room.  This time, though, I was wearing jeans and wanted to try it without taking off my pants....especially since the floor was wet and I didn't want to get anything on my jeans or socks.

First thing I'm wondering, though, is which way do I stand.  There was a little "shield" on one end with the toilet exit on the other end.  I figured I should face the door since the shield was hopefully there to prevent spraying.

I align my feet over the trough, pull my pants down to my knees, grab the crotch of my jeans to keep them out of the way of any spray, then squat.  For an American that has never really had to squat to pee, this is not an easy position.  One of my old coworkers once joked that Asians had finely sculpted calves and could jump so high because of the squatting.  Who knows if that helps or not, but I think growing up using a squat toilet or simply using one on a constant basis probably helps get one in shape to use it without such physical strain.

Anyway, I start to pee while still holding the crouch of my jeans and keeping a nice wide stance.  It was not very comfortable at all, but I did manage to keep my jeans pee-free.  I did this twice while I was at the facility and seemed to be successful on both attempts.

When I speak at colleges, I am often asked if I miss anything from living as a man.  I oftentimes ask them if they have ever lived anywhere else and if they miss anything from where they used to live.  They usually say they miss something.  I ask them if they like where they live now.  They usually say yes.  Then I tell them that I miss a few things.

One of the things that I miss is being able to pee while standing up.

Fortunately, I like where I live now...both figurative and urinary.
Posted by Kara at 2:04 PM 3 comments: