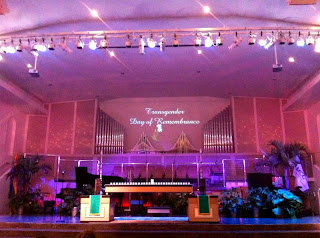 I'm on vacation in Fort Lauderdale before Thanksgiving and decided to catch the Transgender Day of Remembrance Vigil here. It was a small crowd of about 50 people, but it was a very caring and lovely presentation. Charlotte and myself both participated in the reading of the thirty names of transgender or gender diverse people that have been killed over the past year.

Each person would walk to the microphone, read the name and their story, and then extinguish one of the thirty candles they represented. After all the names were read, each candle was relit, which I found to be very unique. I suppose it represents our honoring of them and how each of us can keep their memory alive.

After that, ceremony facilitator Jacqui addressed the audience with her speech entitled "Hate". Although the name insinuates something else, her speech was really great and to the point. Afterward, Charlotte and myself spoke briefly with Jacqui about the very honorable vigil for DOR. The whole event lasted about an hour, which was the perfect length for us, and it did not have a heavy religious theme, which was more to my liking.
Posted by Kara at 8:45 AM 2 comments:

Getting Parents to Let Go

Before I start this post, I wanted to mention how ironic it is that the one woman most impersonated by gay men has a daughter that became a man. The irony just eclipses this total gender binary.

OK, so Cher was on Letterman last night, and the two talked about her son, Chaz, for a while. (I didn't catch the episode, but you can catch the interview here.) Now, I've never met Cher, but I have had the opportunity to chat with Chaz for a while, and he seems like a really nice guy.

I watched the interview and it's this total mash-up of improper pronouns and sexual orientations...even calling Chaz a lesbian. Dave tried to stay on track with the pronouns, sexual orientations, and providing a glimpse of the female past along with the male present, but Cher can't seem to let go.

I suppose that's one of the hardest parts for a parent...saying good-bye to the child you raised and then welcoming in a new member of the family that you feel you don't even know.

She's not a bad parent...she's still there for Chaz, but I get a strong sense that not everything is keen for Cher. What I thought was awesome, though, was the audience's applause when Cher said that Chaz was brave. I think if more parents saw that society is more impressed with parents being there for their children no matter what, than the parents being embarrassed because they think they'll be thought of differently and blamed for something their child did, there would be a lot fewer homeless transgender children.

I also cringed when Cher kept messing up the pronouns and then said that Chaz didn't care about her using the wrong pronouns. Yeah, right...he's probably just tired of always correcting your ass. OK, that's not what Chaz thinks...it's just what I think. That would drive me crazy if my parents did that, and I really hope that's not how they talk about me when I'm not there.

At least they won't be on Letterman anytime soon, so that shouldn't be too much of a problem.
Posted by Kara at 11:47 PM 2 comments:

Is Tranny a Bad Word?

It's back. Yup, the T-word...and it just happens to correspond once again with Trannyfest.

I've seen a number of people head to my post from two years ago which concerned the word "Tranny", and I have noticed the response from two TV programs the past week...both dealing with transgender women, so I kinda put two and two together.

People still want to know if 'tranny' is a bad word.

Last week I caught Glee's Rocky Horror-themed episode and heard the lines that are causing a stir. I also thought the song "Sweet Transvestite" sounded different...and it did, with the decision to replace "transsexual" with "sensational". I've never actually seen Rocky Horror (I know, gasp, right?) all the way through so I wasn't quite sure that they changed some of the lyrics. I thought it was pretty groundbreaking to use what they did, but I was disappointed with all the stuff going on behind the scenes...such as removing the word "trannsexual" from the song. When one of the characters said their parents wouldn't let them play the tranny part (I'm paraphrasing, of course), it's not the greatest situation. It tends to make people think that being a "tranny" is horrible or degrading. The episode used the characters decision to further enhance the battle of doing the play in the first place and was simply a mechanism for further plot development, but the way they did it was purely without class.

So, to recap the Glee episode, they used the word 'tranny' a number of times...mostly in ways that made it sound horrible to be one, and they were prevented from using the word 'transsexual' in the lyrics of a classic Rocky Horror Picture Show song.

Via a transgender forum a few days ago, I also caught some of the issues with the Jersey Shores crew. It's no fun to be mocked with "If you have to think about it...."

GLAAD tackled both issues, and MTV has since apologized for the episode. Glee is one of the most LGB friendly shows on TV right now, but I think the jury is still out on if they are LGBT friendly.

As for Trannyfest, I attended Saturday's showing when Marty's film, Gillian, was presented. I helped Martin and Lisa brainstorm after we received the film requirement, and came up with the idea of having a woman with a sprained MCL fall in love with her physical therapist. Sound familiar? Although I love writing, Marty wrote the script since I was too busy with work and sports.

I pulled the idea from my own experience from around two and a half years ago when I sprained my MCL. I had a physical therapist who I thought was a lesbian, but she was just a cute short-haired girl who drove a jeep and had a dog, but also had a boyfriend. And, of course, I never hit on her or anything. In our story, though, I figured we could use the knee brace as a metaphor for her loser boyfriend. Ahh...metaphors.

Anyway, there were a number of trans-themed films shown both Friday and Saturday. Some were great, some were good, and some weren't...but that's the thing with independent films...you get a good mix of things and just appreciate the art factor.

As for if 'tranny' is a bad word, it all depends on the situation. If you are not trans, 99% of the time the word is going to be considered offensive.

There are other options to the word 'tranny', though...such as trans-woman, trans-girl, trans-man, trans-guy, trans, and my favorite, 'T'.

So, if you really want to use the word 'tranny', you should have been at Trannyfest this past weekend where you could have said it as much as you wanted and no one would have cared.
Posted by Kara at 6:53 PM 1 comment: