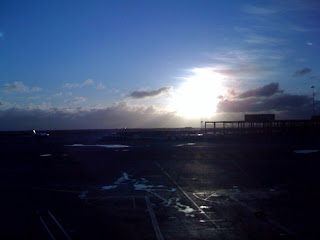 My dad has a conference in Hawaii this week, so I met him and my mom out here for a few days. I flew out Sunday from San Francisco and caught this incredible sunrise from the airport terminal.

The plan was for my dad to do his conference stuff during the day while my mom and I chilled. She's not able to do too much since she has little energy after all of the treatments lately. 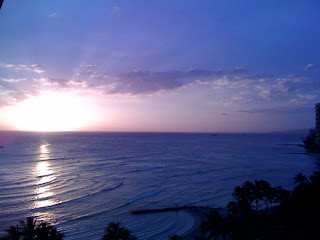 Since my dad is the military man, we visited the Pearl Harbor memorial Sunday afternoon before catching this even more remarkable sunset at the hotel.

I've gotten up early to run lately, which has been really refreshing, but obviously makes me sore since I am a bit out of shape compared to my previous levels of fitness. The temperature has been really moderate and the humidity is fairly tame, except when talking about how bad my hair has had to fight it. One thing I have noticed during my runs, though, is how much men stare at my breasts. Typically I run in the evening where there are few people, but here in Hawaii there are a lot of people up and down Waikiki Beach in the morning.

Today, I tried my hand at surfing...for the first time ever. (I'll post a photo later.) I actually met a number of people today...while surfing and while chilling at a luau tonight. There were two guys from Boston in the water taking surf lessons in my same group, and there were two guys and two girls in the Australian Navy there tonight. One of the Australian girls was actually named Kara, but said it the other way. It's amazing how easy it is to meet new people in touristy areas compared to just being at home where I literally know none of my neighbors.

Had I been by myself or with a friend, we probably could have hung out with either group, but since I was with my mom, I spent a lot of quality time with her and my dad. I'll just have to remember to grab a friend once in a while and take a vacation.

It rhymes with Sarah

OK, I'll admit it, I had American Idol on last night. I wasn't really watching it entirely, but I had it on while I was doing some other stuff.

They have a new judge on this season. Her name is Kara DioGuardi. It's nice to see another Kara once in a while, because most people have never met a Kara before. And the more difficult thing about that is so many people have no idea how to say the name...either Kara like Sarah, or Kara like car-ruh.

If a person is English or from the Eastern US, they usually call me "car-ruh", and it's about 50-50 on the rest of the world saying it right.

Another major issue is that there are plenty of Kara's that actually go by the "car-ruh" version.

The thing is, people don't say Sara as "Sar-ruh"...they say "Sair-ruh", so I have never understood why people continue to use "car-ruh". I mean, even Karen uses the "air" sound instead of the "are" sound.

Anyway, Kara DioGuardi was used to all different pronunciations as you could see her blow off people saying her name wrong. We'll see if or when Simon decides to finally use the right pronunciation...that is, of course, if I am watching it.
Posted by Kara at 10:23 AM 4 comments: Links to this post

Putting the T in Reality TV

There is another transsexual woman appearing on reality TV, following Isis on this past season of America's Next Top Model. Now we have Katelyn, a post-op twenty-something living in Brooklyn on MTV's Real World. Links here and here.

And while I am extremely jealous of her gorgeous hair, doesn't she know there is an embargo on all transsexuals picking the name Kate? Sheesh!!! (Muahahaha)

She's from Missoula, Montana, a place I have visited for a weekend, and lives in Florida, so I figure she's seen her share of responses from the left and right.

She's also a bisexual computer geek, which seems to represent a vast majority of transgender women I see nowadays.

From all of the airtime T's are getting, it seems like transsexuals are the hot topic now...that, or they are running out of interesting people to put on reality TV.
Posted by Kara at 7:31 PM 1 comment: Links to this post

I ran across this paper entitled "In Search of the Ordinary", written by a young, blind woman named Tasha. I cannot compare in quality to the words she transcribes, but I think it is quite worth the read, and provides a very interesting glimpse of the world we all see...however we may see it.
Posted by Kara at 6:37 PM 1 comment: Links to this post

At least you'll never have to go through menopause

Twice in the past 3 days, the topic of menopause has come up. The first came up on a date the other night, the second was yesterday at work.

"How is the New Year going?"

"At least you'll never have to go through menopause."

I proceed to tell her that I had my share of hot flashes when I started on a new hormone regimen several years ago. Every afternoon I was having hot flashes that lasted about 30 minutes to an hour. My endo finally bumped up my hormone dose and I felt fine.

I ask her how often she is having hot flashes and she says a few times a day.

So, my menopause was more of an abbreviated one compared to the actual, but I still face the consequences of both a female and male menopause as I age.

Well, I opened this blog entry with a teaser that I had a date. I met this girl off a dating website and had dinner with her before the holidays. Now that I am back in town, we got together to play a little pool. (She demolished me in the first game, she lost the second game, and I finally won the third...which she may have let me win.)

As we are sharing a small pizza, she mentions that she thinks she is starting to go through the initial stages of menopause. She's 5 days older than me. I tell her that I've already been through some of it...that I can't have kids...that I was born without ovaries or a uterus, and that I was born male.

Sometimes I wish I didn't pass as well, so that the shock of the statements above didn't hit so hard...or that I was simply more open and dated a person that knew up front.

The hard reality is that things change when a person goes from not knowing to knowing. It's a big lever and you can hear it go wham into the electrical contacts of the other side.

She said it was a lot to ingest, and that it took time.

Perhaps that is why I won the third match, I'd shocked her enough to throw her off her game. She still asked for a kiss before we departed, though, so perhaps she just needed a little time to let things sink in. I guess time will only tell.
Posted by Kara at 7:58 AM 1 comment: Links to this post 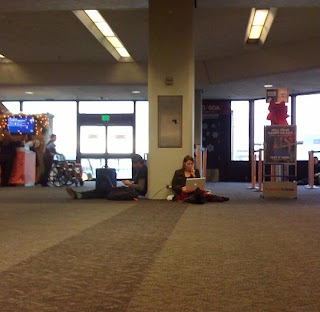 Here is how my holiday vacation started on the day before Christmas. I joined the tribe of Airport Pillar Outlet Dwellers (otherwise known as the "AiPOD's"). Unfortunately, I sat at the outlet where someone decided to spit out their gum, and I eventually sat in it.

When I arrived at my parent's place, a lot of people were feeling pretty toasted from the alcoholic spirits, with even my dad calling every few minutes on my drive in to check my progress and joke that if I had any trouble no one wass sober enough to come get me.

Christmas went well. The whole time I was there actually went fairly well. As usual, I tried to stay out of politics and religion. 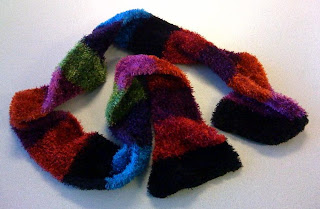 The only issue I had came down to my scarf.

Yeah, my scarf was a big trouble maker.

When my family was attending my older nephew's sporting event, my other little nephew is being watched by my sister, my mom, and myself. He's a little rascal and eventually becomes infatuated with my very colorful scarf. So, me being the one to entertain, decided to let him play with it. He's only 2 and a half, so I pull it off my neck and move to put it on his neck when my sister blasts:

Of course, by now, he's touching it and I need to take it away, so he continues to pull on it as I put it back around my neck. My sister finally pulls him back near her so he can't choke me to my own wanted and eventual death.

A few days later at my parent's place, I had the scarf stashed away with my shoes near the door to outside. As we are sitting down at the large dining table, I see my little nephew running around with my scarf around his arms and neck like some flashy boa.

I quickly grab it and tell him, "Little man, you're just wanting your mom to kill me, aren't you?"

I was back in the office today and mentioned this to my boss, who immediately says, "He's 2 and a half. He just sees something really colorful to play with...like a big caterpillar or something. Your sister is just overreacting because of your situation."

Whew. At least I'm not imagining the overreaction.

New Years Eve Day was interesting. I drove my mom 3 hours to the treatment facility, sat with her during her 5 hour treatment, then drove us 3 hours home. We made it home a few hours before the new year entered into our lives. At least the roads were fairly empty most of the way home.

Overall, it was a really nice vacation and I got to see a large portion of the extended family, including some good conversation with my mom on our 6 hours of driving.
Posted by Kara at 1:02 PM 1 comment: Links to this post